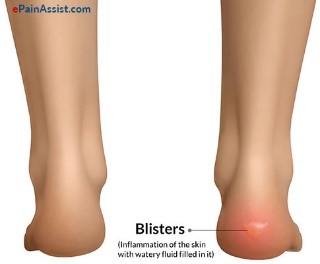 Previously we all thought blisters were caused by rubbing, heat and moisture, however more recently the research has suggested that blisters are caused by skin stretching, which is called shearing forces.

We need to prevent the shearing forces and this can be done a number of ways.

Ideally you do not pop the blister, allow the fluid to be reabsorbed and to heal on its own. However if the blister is in an irritated place i.e. like your arch or the back of your heel, then using a sterile needle to release the fluid can help.

Do not remove the overlying tissue though, this is to protect the tissues underneath and help prevent infection. Once this has been done cover the blister with a sterile fabric band aid.